Pagan Symbols of the Popes

Occult symbols abound in the Roman Catholic Church, which are seen in articles of clothing, ornaments, and architecture, as well as art.

Take for example the Babylonian sun god, Shamash, (Akkadian).  The symbol for this pagan god is found in many places within the Catholic Church.  During the coronation of Pope John XXIII, who was recently canonized as a saint by Pope Francis, he is pictured wearing a white glove with a large jewel on the ring finder and the sun god symbol on the top (picture below).

This symbol is seen in ancient Babylonian art such as the example pictured below:

A close up of the symbol shows the detail:

Now look at the same symbol in a Catholic Church, and coincidentally the IHS may have a double meaning that also represents the pagan gods, Ishtar (I), Horus (H), and Shamash (S): 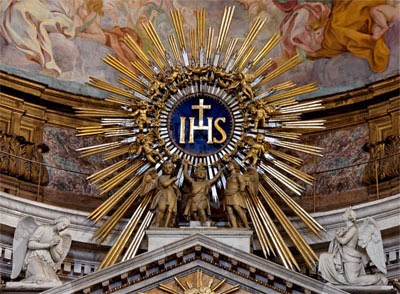 This is the same pagan sun-god image pictured in ancient Babylonian art, as depicted below: 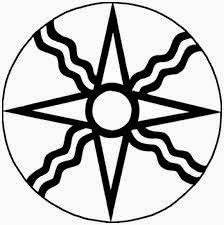 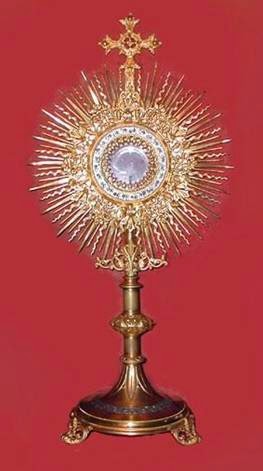 The photo below depicts John Paul II, recently canonized as a saint by Pope Francis, holding the Roman Monstrance:

This sun-god symbol is found in Saint Peter's Square at the Vatican, as pictured below, with a giant obelisk in the center: 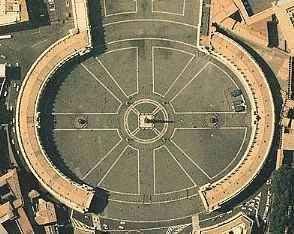 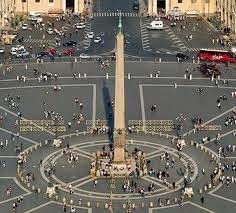 The obelisk was an ancient phallic symbol used in heathen religions to honor and celebrate the regeneration of the sun god Ra (Egypt’s greatest deity).  For those of you who do not know what a phallic symbol is, it is a pagan symbol representing the male reproductive organ (penis).  In the Old Testament, the Scriptures record how the Israelites provoked God to anger by setting up wooden phallic symbols called Asherah (Ashtoreth) poles.


One thing is for sure, there is no biblical reason why these or any other pagan symbols should be lifted up in the Church.  Such things provoke the Lord to anger, because they are detestable in His sight. Yet men who have led the way in doing so, namely John XXIII and John Paul II, have been canonized as saints.

Associating with the Wicked
If you are a part of this religion, I urge you to listen to and heed this warning.  It is an occult religion.  Someone might say, "I attend the Catholic Church and take communion, but I don't follow all of their idolatrous practices."  If that is you, I would like to remind you that the Scripture warns us not to associate with the wicked man who calls himself a brother:

"I wrote you in my letter not to associate with immoral people; I did not at all mean with the immoral people of this world, or with the covetous and swindlers, or with idolaters, for then you would have to go out of the world. But actually, I wrote to you not to associate with any so-called brother if he is an immoral person, or covetous, or an idolater, or a reviler, or a drunkard, or a swindler--not even to eat with such a one. For what have I to do with judging outsiders? Do you not judge those who are within the church? But those who are outside, God judges. REMOVE THE WICKED MAN FROM AMONG YOURSELVES." (1Co 5:9-13)

If you agree that these unbiblical practices of the Catholic Church are evil , then why do you continue to associate with those who commit these acts by having fellowship and communion with them?  That's a question you will need to answer between you and God.

Author's note: Don't miss Former Pope in Hell Declared a Saint, Angelica Zambrano's First Visit to Hell, Angelica Zambrano's Second Visit to Hell, and Visitation of Jesus to Samuel Oghenetega. I also suggest visiting Jack Chick's page on Catholicism. You may also like the other posts in this blog, such as Messages from the Lord for Catholics Worshipping Idols, Exposing Heresy, Pope Frances Supports Homosexuality, and Saints Alive in Jesus. You may access more of my articles on the Main Directory of this blog, as well as my complete blog directory at "Writing for the Master.

Do You Want to Know Him?
If you want to know Jesus personally, you can. It all begins when you repent and believe in Jesus. Do you know what God's Word, the Bible says?

Len Lacroix is the founder of Doulos Missions International.  He was based in Eastern Europe for four years, making disciples, as well as helping leaders to be more effective at making disciples who multiply, developing leaders who multiply, with the ultimate goal of planting churches that multiply. His ministry is now based in the United States with the same goal of helping fulfill the Great Commission. www.dmiworld.org.
Posted by Len at 11:23 AM