Today I watched a video of Pope Francis declaring John XXIII and John Paul II as saints of the Catholic Church. This is an occult practice, people.  In the video at 1:37, notice the pope kissing the gold ornaments containing the blood of these dead men!  That is called idolatry and it is detestable in the sight of God.

Then the Lord took me to place where there was a very well-known man.  Before now, I used to live as a double minded young Christian girl.  I used to think that any person that died would go to Heaven; that those who celebrated mass, would also go to heaven, but I was wrong.  When Pope John Paul II died, my friends and relatives would tell me that he had gone to heaven.  All the news on TV, on Extra and many other places would say, "Pope John Paul II has died, may he rest in peace.  He is now rejoicing with the Lord and his angels in heaven" and I believed all of it.  But I was only fooling myself, because I saw him in Hell, being tormented by flames.  I looked at his face, it was John Paul II!  The Lord said to me, "Look, Daughter, that man that you see there, is Pope John Paul II.  He is here in this place; he is being tormented because he did not repent." 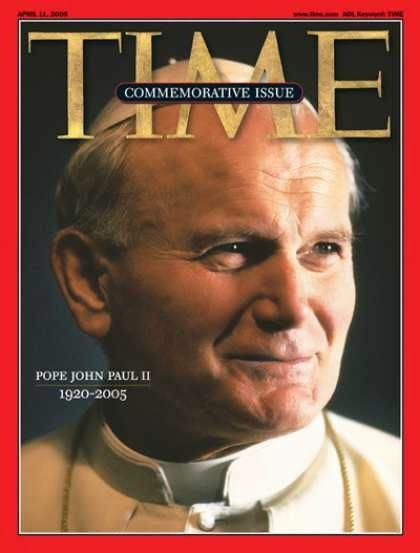 But I asked, "Lord, why is he here? He used to preach at church." Jesus replied, "Daughter, no fornicator, no idolater, no one who is greedy and no liar will inherit My Kingdom." (Eph 5:5) I replied, "Yes, I know that is true, but I want to know why he is here, because he used to preach to multitudes of people!" And Jesus responded, "Yes, Daughter, he may have said many things, but he would never speak the truth as it is.  He never said the truth and they know the truth and although he knew the truth, he preferred money over preaching about salvation.  He would not offer reality; would not say that hell is real and that heaven also exists; Daughter, now he is here in this place."

When I looked at this man, he had a large serpent with needles, wrapped around his throat, and he would try to take it off.  I pleaded with Jesus, "Lord, help him!"  The man would scream, "Help me, Lord; have mercy on me; take me out of this place; forgive me!  I repent, Lord; I want to return to Earth, I want to go back to Earth to repent." The Lord observed him and said to him, "You very well knew.  You knew very well that this place was real...It's too late; there is no other opportunity for you."

The Lord said, "Look, Daughter, I am going to show you the life of this man."  Jesus showed me a huge screen on which I could observe how this man offered mass many times to the multitudes.  And how the people who were there were so idolatrous.  Jesus said, "Look, Daughter, there are many idolaters in this place.  Idolatry will not save, Daughter.  I am the only One who saves, and outside of Me, no one saves.  I love the sinner, but I hate sin, Daughter.  Go and tell humanity that I love them and that they need to come to Me."

As the Lord was speaking, I began to see how this man received multitudes of coins and bills; money, all of which he would keep.  He had so much money.  I saw images of this man seated on a throne, but I was also able to see beyond that.  While it's true that these people do not get married, I can assure you, I'm not making this up, the Lord showed it to me, those people do sleep with nuns; with many women there!

The Lord showed me these people living in fornication, and the Word says that no fornicator will inherit His Kingdom.  As I was watching all of this, the Lord told me, "Look Daughter, all of this which I am showing you is what goes on, what he lived and what keeps on happening among many people, among many priests and popes existing." Then he told me, "Daughter, go and tell humanity that it's time to turn to Me."

Angelica Zambrano is not the only person to see Pope John Paul II in hell.  An African boy named Samuel  Oghenetega also saw him there (see Visitation of Jesus to Samuel Oghenetega).

Catholic People Now Contacting Dead Man in Hell
So now that Pope Francis has declared John Paul II a saint, members of the Catholic Church will be calling upon this dead man in hell to intercede for them.

"There shall not be found among you anyone who makes his son or his daughter pass through the fire, one who uses divination, one who practices witchcraft, or one who interprets omens, or a sorcerer, or one who casts a spell, or a medium, or a spiritist, or one who calls up the dead. For whoever does these things is detestable to the LORD; and because of these detestable things the LORD your God will drive them out before you. You shall be blameless before the LORD your God."  (Deu 18:10-13)

One must seriously wonder how much discernment Pope Francis has, when he declares this man to be a saint, who is actually in hell.  I do not have any personal animosity toward any of these past or present popes, but I must declare the truth in love.  They are not leading people in the Truth of God's Word!  They do not offer reality.

Beware of False Prophets
The warning of our Lord Jesus to beware of false prophets applies to present and past popes:

"Beware of the false prophets, who come to you in sheep's clothing, but inwardly are ravenous wolves. You will know them by their fruits. Grapes are not gathered from thorn bushes nor figs from thistles, are they? So every good tree bears good fruit, but the bad tree bears bad fruit. A good tree cannot produce bad fruit, nor can a bad tree produce good fruit. Every tree that does not bear good fruit is cut down and thrown into the fire. "So then, you will know them by their fruits. Not everyone who says to Me, 'Lord, Lord,' will enter the kingdom of heaven, but he who does the will of My Father who is in heaven will enter. Many will say to Me on that day, 'Lord, Lord, did we not prophesy in Your name, and in Your name cast out demons, and in Your name perform many miracles?' And then I will declare to them, 'I never knew you; DEPART FROM ME, YOU WHO PRACTICE LAWLESSNESS.'" (Mat 7:15-23)

Also see The Rise of Antichrists.

Associating with the Wicked
If you are a part of this religion, I urge you to listen to and heed this warning.  It is an occult religion.  Someone might say, "I attend the Catholic Church and take communion, but I don't follow all of their idolatrous practices."  If that is you, I would like to remind you that the Scripture warns us not to associate with the wicked man who calls himself a brother:

"I wrote you in my letter not to associate with immoral people; I did not at all mean with the immoral people of this world, or with the covetous and swindlers, or with idolaters, for then you would have to go out of the world. But actually, I wrote to you not to associate with any so-called brother if he is an immoral person, or covetous, or an idolater, or a reviler, or a drunkard, or a swindler--not even to eat with such a one. For what have I to do with judging outsiders? Do you not judge those who are within the church? But those who are outside, God judges. REMOVE THE WICKED MAN FROM AMONG YOURSELVES." (1Co 5:9-13)

If you agree that these unbiblical practices of the Catholic Church are wicked, then why do you continue to associate with those who commit these acts by having fellowship and communion with them?  That's a question you will need to answer between you and God.

Therefore, "'Come out from them and be separate,' says the Lord. 'Touch no unclean thing, and I will receive you. And, I will be a Father to you, and you will be my sons and daughters,' says the Lord Almighty." (2 Co 6:17)

Author's note: Don't miss Angelica Zambrano's First Visit to Hell, Angelica Zambrano's Second Visit to Hell, and Visitation of Jesus to Samuel Oghenetega. I also suggest visiting Jack Chick's page on Catholicism. You may also like the other posts in this blog, such as Messages from the Lord for Catholics Worshipping Idols, Pope Frances Supports Homosexuality, Exposing Heresy, The Rise of Antichrists, and Saints Alive in Jesus. You may access more of my articles on the Main Directory of this blog, as well as my complete blog directory at Writing for the Master.

Len Lacroix is the founder of Doulos Missions International.  He was based in Eastern Europe for four years, making disciples, as well as helping leaders to be more effective at making disciples who multiply, developing leaders who multiply, with the ultimate goal of planting churches that multiply. His ministry is now based in the United States with the same goal of helping fulfill the Great Commission. www.dmiworld.org.
Posted by Len at 5:55 PM