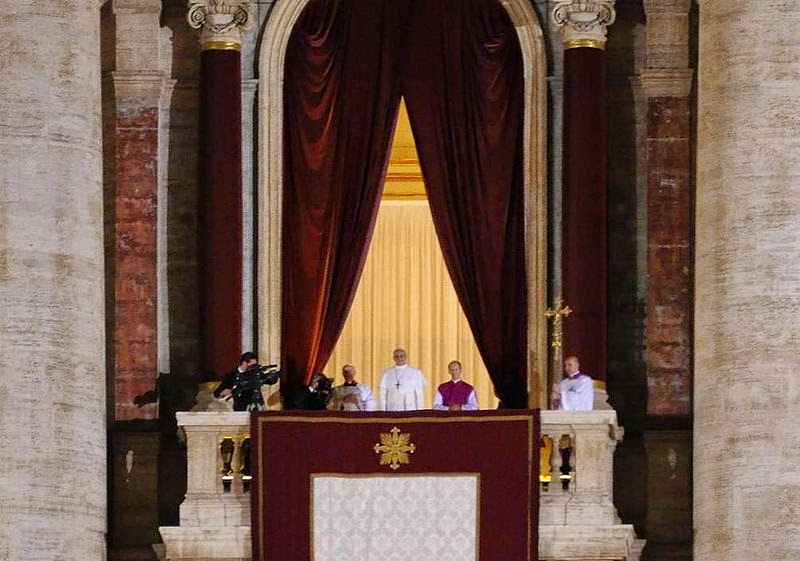 On October 28, 2014, Pope Francis declared at a gathering at the Pontifical Academy of Sciences that evolution is real and the Big Bang happened.  He said, “When we read about Creation in Genesis, we run the risk of imagining God was a magician with a magic wand, able to do everything. But that is not so,” He added: “He created human beings and let them develop according to the internal laws that he gave to each one so they would reach their fulfilment."

This is nothing new for the Roman Catholic Church.  According to Bible Light, "Pope John Paul II, on the 23rd of October, 1996, while speaking to the Pontifical Academy of Sciences plenary session at the Vatican, declared the evolutionary theories of Charles Darwin to be fact, tacitly acknowledging that man evolved from the apes, and reducing the biblical account of Genesis to that of mere fable!"  The Bible Light goes on to say, "Apparently most Roman Catholic schools have taught evolution pretty much as fact since Pope Pius XII's encyclical HUMANI GENERIS in 1950."

The Biblical Record
The Scripture clearly says God created the heavens and the earth, the sea and all that is in them. "He is the Maker of heaven and earth, the sea, and everything in them-- he remains faithful forever." (Ps 146:6)

"In the beginning God created the heavens and the earth." (Gen 1:1). You need to have faith in God to understand that He commanded and the universe was formed.  "By faith we understand that the universe was formed at God’s command, so that what is seen was not made out of what was visible." (Heb 11:3).  He did not make it from that which is visible. He made everything we see out of nothing. And then from the dust of the earth, He formed man.

"Then God said, 'Let us make mankind in our image, in our likeness, so that they may rule over the fish in the sea and the birds in the sky, over the livestock and all the wild animals,[a] and over all the creatures that move along the ground. So God created mankind in his own image, in the image of God he created them; male and female he created them.' " (Gen 1:26-27)

When God finished His work of creation on the sixth day, "God saw all that he had made, and it was very good." (Gen 1:31a).  He did not need to improve on it, and it did not need to evolve over the eons in order for it to be what He created it to be.  In fact, immediately after creating Adam, God was having fellowship with Him in the garden.  It would make no sense for God to have fellowship with an amoeba.  And Adam was able to name all the animals (Gen 2:19-20).  A single-cell organism would not be capable of naming all the animals, and if they had to first evolve, then they would not have been developed enough yet for him to distinguish them from one another and name them.

Jesus Himself validated the creation account. He said, “But at the beginning of creation God ‘made them male and female.’"  He would not have said this about single-cell organisms or primates.  He spoke these words in the context of marriage, which does not apply to cells or animals.

“Ah, Sovereign Lord, you have made the heavens and the earth by your great power and outstretched arm. Nothing is too hard for you." (Jer 32:17)

Yet the Pope will not put up with sound doctrine like this, since he is a false prophet, and is speaking for the Babylonian religion that prefers to gather around itself a great many teachers who say what they want to hear.

"For the time will come when people will not put up with sound doctrine. Instead, to suit their own desires, they will gather around them a great number of teachers to say what their itching ears want to hear." (2Tim 4:3,4)

While there is certainly such a thing as micro-evolution in which organisms can mutate within their own species, that does not mean man evolved from apes or from a pool of organic material.  Microevolution is genetic change in a population over generations that does not result in new species. Macroevolution is something entirely different, and the Bible does not teach that anything of that sort.  There is no observable evidence for macroevolution, therefore it is not a fact, but a theory that contradicts the Bible.

Putting it All Together
It is no surprise to me that the Pope is saying such unbiblical things as these, since there are numerous other Unbiblical Practices of the Catholic Church, and Pope Frances Supports Homosexuality.

If you are a part of this religion, I urge you to listen to and heed this warning.  It is an occult religion.

Attribution notice:  Most other Scriptures taken from The Holy Bible, New International Version® NIV®, unless otherwise noted. The photo of Francis giving his first address as pope at St. Peter's Basilica, 13 March 2013, is used courtesy of Wikimedia Commons. The photo of Pope Francis on 20 March 2013, one week after his inauguration, is also courtesy Wikimedia Commons.

Author's note: If you enjoyed this post, I recommend reading my articles Unbiblical Practices of the Catholic Church, Angelica Zambrano Hell and Heaven, Angelica Zambrano's Second Visit to Hell, Rachael Mushala Testimony of Hell, Testing the Spirits of False Prophets, Dare to Believe, The End Has Come, and New Age-New World Order. I also recommend The Next Pope. You may access more of my articles on the Main Directory of this blog, as well as my complete blog directory at "Writing for the Master.

Len Lacroix is the founder of Doulos Missions International.  He was based in Eastern Europe for four years, making disciples, as well as helping leaders to be more effective at making disciples who multiply, developing leaders who multiply, with the ultimate goal of planting churches that multiply. His ministry is now based in the United States with the same goal of helping fulfill the Great Commission. www.dmiworld.org.
Posted by Len at 1:24 PM