HOREMOW Descends to a New Low 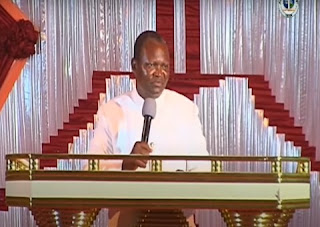 I have previously written about my Issues and Concerns with HOREMOW, followed later by my sequel called Exposing the Darkness within HOREMOW. Those were written years ago, but there has been no repentance from Paul and Linda Rika. Rather than repent and confess their sins, they have attacked those who have brought accusations against them.

Let's take for example a group of believers calling themselves the Concerned Brethren in the Lord. They presented numerous documents showing very compelling evidence of sin on the part of Paul Rika (see here). But instead of repenting, Paul Rika stepped up behind a big golden pulpit all dressed in white and declared his innocence. He surveyed the audience to show that he and his ministry still have the approval of men. He referred to the ones bringing the accusations against him as wolves, and told the audience that there is nothing to see here, and that they should just forget about what they heard and move along with their business. He also falsely stated that one of the documents presented by Concerned Brethren is fake. This video is called Take Heed of Grievous Wolves Against HOREMOW by Paul Rika.

I researched this and found out the legal document that Paul Rika says is fake is actually genuine. I also discovered that brother Ama Dediare, his US Coordinator for HOREMOW, recently resigned from his position and left HOREMOW.

Paul Rika recently sent out a questionnaire to all his coordinators. The questionnaire seemed to be designed to expose any traitors and ensure total allegiance to himself among the ranks of the coordinators. The questionnaire seems to be checking to ensure that all the coordinators are loyally devoted to Paul and Linda Rika, and ensure that they are kept on a pedestal in the eyes of men. When brother Ama saw the questionnaire, he knew that he must choose between God and man, and he already knew that he was going to stand with God. He honestly answered the questionnaire and stood up to Paul Rika courageously (see here). Consequently Paul Rika engaged in his usual tactics by committing a sort of character assassination against brother Ama. He spread the rumor through a false revelation about brother Ama and his wife that claimed they had used the ministry's money for their own personal business. Therefore he publicly accused this man, who had faithfully served him, of being a thief.

Then panels were organized to conduct an inquiry of brother Ama. He told them that he was resigning, and they asked for him to put into writing the reason for his resignation, which he did. The document is a sequel to his resignation letter called Reasons for my Resignation Letter Pastor Ama, and it is well worth reading (see here). In the letter he explains everything and lays out serious allegations against Paul and Linda Rika.

As most of you know, Michael Thomas Sambo, who is a preacher with Global Revival of Holiness Ministry, used to be a HOREMOW Coordinator. In fact, he was also a board member of that ministry. When I asked him to review this article, he replied in part:

"Paul Rika's modus operandi is still the same. It's downright questionable that he accuses almost everybody that tells him the truth of witchcraft and immorality or stealing HOREMOW money. These are tools and instrument he uses to get people out of the movement.

Recently an individual from HOREMOW, whom I have never met, went to the Lord's Chosen Church in Lagos, Nigeria and testified that Linda is from the marine kingdom. I don't know this individual, have never met him, and have never had any form of discussion with him. After the video of his testimony was uploaded to YouTube, Linda Paul Rika said God revealed to her that I, Michael Sambo, was the one that sponsored and asked the person to go and testify against them.

Beloved, I do not know this individual, how could God reveal a matter that is not true? When has God come short of truth that he resorts to the use of lies? I brought it to the notice of a cousin who is the wife of the former Administrative Secretary of HOREMOW, and she reliably informed me that she met Paul Rika and informed him of what I said of my innocence on that issue. Has he made restitution by apologising for that lie in the name of the Lord on the Lord's altar? Linda lied to God's people. This is delusion and deception.

I was also informed by a reliable source of a man who went to Paul Rika and confessed how his son in 2017 lied to Paul Rika's congregation. He said that his son, who was 7 years old at the time, had then lied that God gave him a revelation of late sister Claire Andoun being in hell. A few months ago, the man confessed that they lied, that they never saw any revelation. Has anyone made restitution for that? Certainly, a lying spirit has taken control over the entire ministry. It's most unfortunate."

He also brought up another matter as well, regarding one of Linda's so-called revelations about him.  He stated:

She also said the doctor she referred to as a witch was sponsoring my ministry. Again, that doctor has never given my ministry one Naira or a dollar or a cent. So they use revelations to malign or destroy brethren whom they don't feel have any value, while others whom they have accused of witchcraft are still there. Moreover, others that are beneficial to them financially, whom he knows are not living right, are allowed to remain, and are given key positions in the movement. This is a common knowledge among the staff in the international headquarters of HOREMOW."

The way that Paul Rika continues to cover up his and Linda's sin with more lies and deception reminds me of the sin committed by Ananias and Saphira (Ac 5), in which they lied to the Holy Spirit. Peter told them that they had not lied to men but to God, because they deceived the church and then lied to the apostles and elders to cover up what they did. Here we have Paul and Linda Rika operating deceptively, and then lying before the whole church to cover it up. It certainly seems quite similar to me. The situation is truly horrible.

Meanwhile the people within HOREMOW continue to go along with this deception and believe the lies. They are expected to keep the Rikas up on a pedestal and "touch not the Lord's anointed." They are typically unwilling to look at the evidence against their leaders, but they should most definitely do so. We continue to pray that the Lord would deliver them and save them, and God is answering out prayers. For He is truly opening people's eyes and helping people like brother Ama realize what is happening, so that they can leave the organization, which has become a cult.

If you are a member or follower of HOREMOW, please take this to the Lord prayerfully. I urge you to come out from among them, so that you will not participate in their sins and receive their judgment (Rev 18:4; 2 Cor 6:7). You need to remove yourselves and your families from that group before you become the next victim. If you know someone who is part of HOREMOW, please share this information with them.

Part I - HOREMOW Issues and Concerns

Author's Note: I also recommend reading HOREMOW Issues and Concerns, More Accusations Against Paul and Linda Rika, Judging Revelations, Visions, and Prophecies, Grieve and Lament for the Church, The Nature of False Prophets, Leadership Approach Reveals View of God, Michael Thomas Sambo's Revelation of Heaven and Hell, A Tale of Two Kings, Testing the Spirits of False Prophets, Accountable, correctable, and teachable, Loving Deeply, Filled Up to All the Fullness of God, Angelic Escape from Terrorist Assassins, Interview with Brother Michael Thomas Sambo, The Wardrobe of the Saints, Whatever You Do, Do All Like This, How to Treat Leaders, Our Senior Pastor, The Shepherding Role of Elders, Exposing Heresy, Divorce -- Two Divine Revelations, Adultery According to Jesus, Holy Living in a Perverted World, Purge the Evil from Among You, and The Rise of Antichrists. You can access the Home page of this blog for more articles on Truth and heresy, as well as my complete blog directory at "Writing for the Master.

Len Lacroix is the founder of Doulos Missions International.  He was based in Eastern Europe for four years, making disciples, as well as helping leaders to be more effective at making disciples who multiply, developing leaders who multiply, with the ultimate goal of planting churches that multiply. His ministry is now based in the United States with the same goal of helping fulfill the Great Commission. www.dmiworld.org.