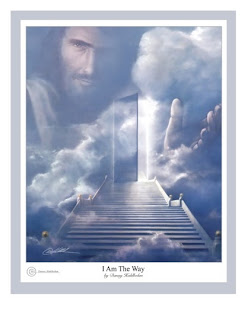 However, in that religion, tradition is actually placed above the Word of God.  In other words, if there is a question about something in the Bible, they follow tradition, rather than the Bible.  Some examples include the veneration of Mary, her "immaculate conception" and her bodily "assumption into heaven." There is also the apocrypha, transubstantiation, praying to saints, the confessional, penance, purgatory, and more. This is not to single out the Catholic Church, but it serves as an example of what many of the traditional religions do.

Yet Jesus taught that the commandments of God take precedence over man-made tradition.  Any religion that does not put God's Word above tradition is in direct contradiction to the words of our Lord Jesus.

The Pharisees and teachers of the Law were concerned about His disciples breaking their tradition.  They kept many traditions, which you can read about in the Mishnah, the Talmud, and the Midrash. These were oral traditions that were written down.  They asked Jesus about it, saying: "Why do Your disciples break the tradition of the elders? For they do not wash their hands when they eat bread." (Mat 15:2)

But Jesus responded by asking them why they broke the command of God for the sake of their tradition.  In order to follow their traditions, they had to break God's commands.

Here is a chart showing the difference between how these people viewed themselves and how God viewed them:


This was like another conversation Jesus had with a group of Jews, which is recorded in John 8.  Once again, there was a sharp contrast between how they viewed themselves and how God viewed them.  The following chart shows the differences:

The Lord has warned those practicing the traditions of men.  Those who attend festivals in the name of worshiping idols or in remembrance of anything, He shall crush them and cast them into the lake of fire (Mt 15:1-28).  In fact, to those worshiping idols in any way, especially the Roman Catholics, the Lord says you should stop doing that or else He will crush you and cast you from His sight into the lake of fire, where there shall be weeping and gnashing of teeth, and their smoke shall rise forever.

Jesus is the Way, the Truth, and the Life, and no man comes to the Father except by Him (Jn 14:6).  Your traditions are not what matters to God.  Jesus said that if you continue in His Word, then you would truly be His disciple.  Then you will know the truth, and the truth will make you free.

Attribution notice: Scripture quotation taken from the NASB. The "I Am the Way" painting © 2012 Danny Hahlbohm, all rights reserved by the artist.

Author's note:  You may also see Roman Catholicism, the Bible and Tradition, by Matt Slick, as as well my own article, Unbiblical Practices of the Catholic Church. Don't miss Angelica Zambrano's First Visit to Hell and Angelica Zambrano's Second Visit to Hell. I also suggest visiting Jack Chick's page on Catholicism. . You may access more of my articles on the Main Directory of this blog, as well as my complete blog directory at "Writing for the Master. Now I'd like to ask a very important question.

Len Lacroix is the founder of Doulos Missions International.  He was based in Eastern Europe for four years, making disciples, as well as helping leaders to be more effective at making disciples who multiply, developing leaders who multiply, with the ultimate goal of planting churches that multiply. His ministry is now based in the United States with the same goal of helping fulfill the Great Commission. www.dmiworld.org.
Posted by Len at 7:21 AM