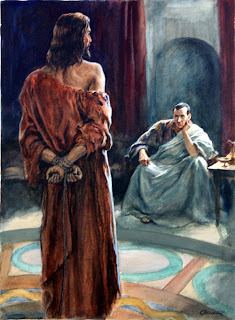 Two thousand years ago, a politician asked a very poignant question.  Governor Pontius Pilate asked, "What is truth?"  For him this was a foreign concept, since he viewed all things as relative rather than absolute, therefore he was confused.  Through his question, he seemed to infer many things.  He incorrectly inferred that the truth itself is a myth, a lie, and does not exist, except in someone's imagination.  He also inferred that there was no such thing as truth. This is because he himself had never come to know the truth.  Little did he realize that the Truth is a Person and he was speaking to Him.

You see, unless you yourself are of the truth, you cannot hear His voice.  You can be looking right at the Truth and not see it.  Jesus had said to Pilate, "Everyone who is of the truth hears My voice." (Jn 18:37b).  The truth is not just information.

God Cannot Lie
Jesus is the Truth! When the apostle Thomas wondered about the way to heaven, Jesus said to him, "I am the Way, and the Truth, and the Life; no one comes to the Father but through Me.” (Joh 14:6).

God cannot lie! The apostle Paul wrote to Titus, “Paul, a bond-servant of God and an apostle of Jesus Christ, for the faith of those chosen of God and the knowledge of the truth which is according to godliness, in the hope of eternal life, which God, who cannot lie, promised long ages ago, but at the proper time manifested, even His word, in the proclamation with which I was entrusted according to the commandment of God our Savior,” (Tit 1:1-3)

Let's look at the premise of Paul's statement and what he inferred:

I would have preferred to make this a pyramid with God at the base and knowledge at the top, but you can still get the basic idea here.  If you follow my little diagram, you will see that the basis of everything Paul inferred here is the fact that God cannot lie.  Our knowledge of the Truth is based on that.  The Truth itself is based on that.  Eternal life is based on that.  You see, God promised it, and since it is impossible for God to lie, you can be sure the promise will be fulfilled.  God is bound by His own nature to keep all His promises.  Not one word of all His good promises has ever failed. 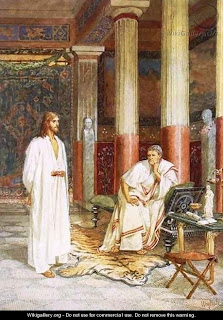 You need to understand that no lie is of the truth!  These days men lie so much about everything that they don't even realize it, and it clouds their understanding of truth.  The truth contains absolutely no lies.  It's one hundred percent genuine reality.  And reality is found in Christ.  And reality is more real than the things of this world, which are here today and gone tomorrow.

Many people today say that nothing is absolute.  They can believe that 2+2=4, but they cannot believe in absolutes.  They would admit that it's ridiculous to try and say that 2+2=5 or 2+2=10.  But they fail to realize that just as there are absolutes in mathematics, there are spiritual absolutes.

The apostle John continued, "As for you, the anointing which you received from Him abides in you, and you have no need for anyone to teach you; but as His anointing teaches you about all things, and is true and is not a lie, and just as it has taught you, you abide in Him." (1Jn 2:27)

Jesus said, "But when He, the Spirit of truth, comes, He will guide you into all the truth; for He will not speak on His own initiative, but whatever He hears, He will speak; and He will disclose to you what is to come." (Joh 16:13)

The Spirit of Truth proceeds from the Father, who cannot lie, and always testifies about Jesus, who is the Truth.  That's why you need His help.

You've got to receive Jesus into your heart and receive the Holy Spirit. "God is spirit, and those who worship Him must worship in spirit and truth." (Joh 4:24).  Young people these days are searching for authenticity, and so is God.  He's seeking those who will worship Him in spirit and Truth.

There's No Truth in the father of lies
On the other hand, many people believe in Jesus and call themselves His disciple, yet don't worship in spirit and truth.  They consider themselves children of God, yet they are children of the devil.  This was the case with many of the Jews who believed in Jesus.

So Jesus was saying to those Jews who had believed Him, "If you continue in My word, then you are truly disciples of Mine; and you will know the truth, and the truth will make you free." (Joh 8:31-32)

"You are of your father the devil, and you want to do the desires of your father. He was a murderer from the beginning, and does not stand in the truth because there is no truth in him. Whenever he speaks a lie, he speaks from his own nature, for he is a liar and the father of lies. (Joh 8:44)

Yes, be very careful, because it is possible to think you are a child of God and yet be a child of the devil.  You need to make sure you are really continuing in Jesus' Word by faith in Him, obeying His commandments.

I want to show you what was inferred here in this statement Jesus made, in contrast to the other diagram above:

The devil had a beginning, since he is a created being, so he is finite.  He is a liar and the father of lies.  He has a nature and evil desires that spring out of that nature.It's out of that nature and those desires that he speaks.  Whenever he speaks, he always lies.  There is no truth in what he says.  This leads to murder and ultimately results in eternal death.

Do you see the difference between this diagram and the one above about God?  They are quite the opposite of each other.  With satan, everything is inverted.  The reason for death is ultimately because of the devil.  He has used the fear of death for millenia to hold people in slavery to himself and to sin.  But through Jesus' death on the cross, He conquered hell and death.  Death has been swallowed up in victory.  Now Jesus holds the key to death:

The apostle John saw Him after He rose from the dead and said, "And when I saw him, I fell at his feet as dead. And he laid his right hand upon me, saying unto me, 'Fear not; I am the first and the last: I am he that liveth, and was dead; and, behold, I am alive for evermore, Amen; and have the keys of hell and of death." (Rev 1:17-18, KJV)

Putting it All Together
Everyone is on a ladder of inferences of some sort.  They start by climbing the first rung of the ladder when they infer something to be true, based on something else they assume is true.  Then from that first rung, then climb to the second rung, making another inference.  And as they continue to climb, they ultimately reach a conclusion, which figuratively is the top of the ladder.  You need to be sure your ladder of inference is leaning against the right wall.

Regarding inference, Noah Webster said, "From the character of God, as creator and governor of the world, we infer the indispensable obligation of all his creatures to obey his commands. We infer one proposition or truth from another, when we perceive that if one is true, the other must be true also."

Some of you reading this today may be like Pilate.  You may be saying, "What is truth?"  I'm here to tell you that Jesus is the Truth!  He cannot lie.  Believe Him and do what He says.  You need a personal relationship with Him, and you need to continue in His Word.  Then you will actually know the Truth and the Truth will set you free.

Others reading this today may be like those Jews who had believed in Jesus, yet they were children of the devil.  If you'll be honest with yourself, you know you're living a lie.  You're not living a holy life of godliness, righteousness, and truth.  You may have put your faith in Jesus, and you believe the facts about Him, but your not yet a child of God.  You must be born again.  It's not enough to be part of a Christian religion.  You need your own relationship with the Lord.  You need to invite Him into your heart.  You need to believe that He died on the cross for your sins, not just the sins of the world.  You need to repent of your wicked ways, and ask God to forgive you, based on the shed blood of Jesus Christ on the cross.  You need to continue in His Word, and then you, too will know the Truth and the Truth will set you free.

Many of you reading this may have been born again at one time, and you say you love the Lord, but the religion you are part of is breaking God's commandments.  Your religion is idolatrous.  There are many idols, objects to pray to, and a lot of adulation of men.  You need to repent and come out from among them.  Be separate and the Lord will receive you.  Don't settle for anything less than the whole Truth and nothing but the Truth.  Jesus is the Truth and no man comes to the Father except by Him.

Attribution notice: Most Scripture quotations taken from the NASB.

Author's note: You may also like the other posts in this blog, such as Accurately Handling the Word of Truth, Tradition vs. Truth, and Pope Frances Supports Homosexuality. You may access more of my articles on the Main Directory of this blog, as well as my complete blog directory at "Writing for the Master.

Len Lacroix is the founder of Doulos Missions International.  He was based in Eastern Europe for four years, making disciples, as well as helping leaders to be more effective at making disciples who multiply, developing leaders who multiply, with the ultimate goal of planting churches that multiply. His ministry is now based in the United States with the same goal of helping fulfill the Great Commission. www.dmiworld.org.
Posted by Len at 8:54 AM