The 25th Interreligious Talks, sponsored by the Roman Catholic Church, were held on October 27, 2011 in Assisi, Italy.  In addition to the Roman Catholic pope, the council was attended by 300 religious leaders, including those of the Roman Catholic religion, the Greek Orthodox religion, the Church of England, and the Ifa divination system, which is an African occult science.  Also present were Islamic, Taoist and Confucianist representatives, as well as Jews, Hindus, Buddhists, Jains, Sikhs, someone from the Salvation Army, a Zoroastrian and a Bahai.  There were even four atheists invited to attend. 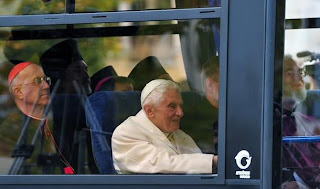 A friend of mine brought to my attention a photo of the Pope (left) in a vehicle with leaders of other religions on their way to the Interreligious Talks.  (Used here per the Fair Use Act for commentary and educational purposes). On the side of the vehicle was a symbol that looked like a dolphin eating it's own tail.
In order to better see the image, please look more closely at the cropped version of the photo below. 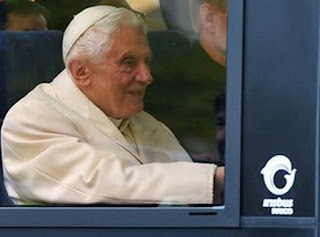 This image was very disturbing and shocking for a number of reasons. First, the symbol affixed to the vehicle is a variation of the ouroboros (also spelled uruboros) symbol.  This symbol represents the serpent that eats its tail.  The symbol represents the "all is one" philosophy, and the "Universal Brotherhood of Humanity." 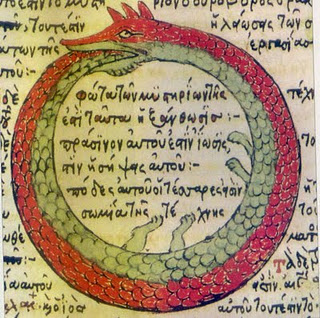 It's contained in the Egyptian book of the Netherworld; in the Hindu world of India, this symbol describes kundalini energy; in Mexico this symbol represents the god Quetzalcoatl on Aztec and Toltec ruins; it was used in the early texts of ancient alchemy, which included non-Christian, mythical, spiritual, and religious practices; this symbol is found on many of the seals and frontispieces of Freemasonary, as well as other Masonic imagery; it's also part of the occult seal of Theosophy, a so-called secret wisdom heralded by Helena Blavatsky; the New Age movement is largely based on Theosophy.  The ouroboros symbol is clearly Luciferian.

Interreligious Journey of Prayer
The second reason these images are so disturbing is that the Interreligious Talks are described as a "journey of prayer" being taken by representatives of all these different Christian and non-Christian world religions.  How can people who do not pray to the same God undertake a true journey of prayer together?  They can if they believe that there are many "saviors" and "enlightened teachers", masters and gurus. But Jesus said,
“I am the Way, the Truth, and the Life.  No man comes to the Father, except by Me.” (Jn 14:6)  That’s pretty exclusive!  He also said, “Enter through the narrow gate. For wide is the gate and broad is the road that leads to destruction, and many enter through it. But small is the gate and narrow the road that leads to life, and only a few find it.” (Mt 7:13-14). There is no other way to God, except through Jesus.  “Salvation is found in no one else, for there is no other name under heaven given to mankind by which we must be saved.” (Ac 4:12)

World Peace
Although the stated goal of these talks is global peace, there cannot be global peace without Jesus.  He alone is the Prince of Peace (Is 9:6).  If all people do not repent and put their faith in Jesus, there will never be world peace.   In fact, Jesus did not come to bring peace anyway.  He said, “Do not suppose that I have come to bring peace to the earth. I did not come to bring peace, but a sword. For I have come to turn ‘a man against his father, a daughter against her mother, a daughter-in-law against her mother-in-law— a man’s enemies will be the members of his own household.'" (Mt 10:34-36) 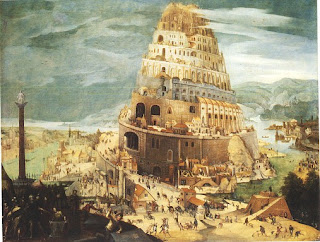 Yet movements like this Interreligious Dialogue that is led by the Roman Catholic Church, and groups like the United Nations seek world peace without Jesus Christ as King.  It’s a modern-day tower of Babel seeking the unification of all world religions.  In fact, in 2000, the Interreligious Talks were held in New York City at the United Nations (UN). The UN does not stand for Jesus Christ, but for a world peace without Him.  One must conclude that these Interreligious Talks are part of a New Age Religion for the New World Order, which the previous and current popes have both called for.  It is becoming more and more evident that the Vatican is the seat of the New World Order.

Attribution notice: Most Scripture quotations taken from the NASB. Most other Scriptures taken from The Holy Bible, New International Version® NIV®, unless otherwise noted. Photos of pope according to Fair Use Act that allows their use for educational and commentary purposes.

Author's note: If you enjoyed this post, I recommend Former Pope in Hell Declared a Saint, Pagan Symbols of the Popes, Pope Frances Supports Homosexuality, and Unbiblical Practices of the Catholic Church. I also visiting this site about the Jesuit Vatican. I also recommend by daughter's poem, The Dazzling Wine of Deception. You may access more of my articles on the Main Directory of this blog, as well as my complete blog directory at "Writing for the Master.

Len Lacroix is the founder of Doulos Missions International.  He was based in Eastern Europe for four years, making disciples, as well as helping leaders to be more effective at making disciples who multiply, developing leaders who multiply, with the ultimate goal of planting churches that multiply. His ministry is now based in the United States with the same goal of helping fulfill the Great Commission. www.dmiworld.org.
Posted by Len at 12:09 PM