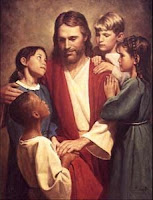 It seems that everywhere these days I hear people saying, “We’re all the children of God.” And if something is repeated often enough, it becomes generally accepted as true. I have even heard this taught in the Christian church from the pulpit. It seems like such a nice teaching, embracing all of humanity as our brothers and sisters. Those who hold this viewpoint believe that whether you are Christian, Muslim, or Jewish, you are a child of God. You are my brother and my sister. Some would even go so far as to say that no matter what you believe, even if you are Buddhist, Hindu, or atheist, that you are a child of God. Others believe that everyone who calls himself a Christian is a child of God.

Does the Word of God address this? If so, what does the Scripture teach about it? Is everyone a child of God by virtue of being part of the human race? If not, then what are the conditions, if any, that a person must meet in order to become a child of God?

You must receive Jesus
In the gospel of the apostle John, we read: “But as many as received Him, to them He gave the right to become children of God, even to those who believe in His name, who were born, not of blood nor of the will of the flesh nor of the will of man, but of God.” (Joh 1:12-13)

From this passage we learn several things. First we learn that you must be given the right to become a child of God. And only those who receive Jesus are given that right. Receiving Jesus is defined here as believing in His name. And finally, you must be born of God, which is defined as something entirely separate from being born of blood or of the will of your parents. So that one passage makes it abundantly clear whom the children of God are.

This means that even those who were from the very bloodline of Abraham were not God’s children, even if they could prove it through their genealogy! Rather it is the children of the promise who are regarded as descendants of Abraham and children of God. The promise he referred to was God’s promise to Abraham that He would multiply his descendants. God made that promise when Abraham was very old and his wife Sarah was beyond childbearing years. Abraham believed God, and by faith his wife bore him a son Isaac. It’s that same faith in God that we need to have in order to become children of the promise.

Jesus affirmed this when He spoke to the Jews seeking to kill Him. He said, “’I know that you are Abraham's descendants; yet you seek to kill Me, because My word has no place in you. I speak the things which I have seen with My Father; therefore you also do the things which you heard from your father.’ They answered and said to Him, ‘Abraham is our father.’ Jesus *said to them, ‘If you are Abraham's children, do the deeds of Abraham. But as it is, you are seeking to kill Me, a man who has told you the truth, which I heard from God; this Abraham did not do.’” (Joh 8:37-40). Jesus said that theses descendants of Abraham did not have the same Father as He did.

They did what they heard from their father, the devil. And Jesus came right out and told them so. He said, "You are of your father the devil, and you want to do the desires of your father. He was a murderer from the beginning, and does not stand in the truth because there is no truth in him. Whenever he speaks a lie, he speaks from his own nature, for he is a liar and the father of lies.” (Joh 8:44)

The children of God are from many nations
When the elders among the Jews were discussing what to do with Jesus, the high priest made the following comment. “But one of them, Caiaphas, who was high priest that year, said to them, ‘You know nothing at all, nor do you take into account that it is expedient for you that one man die for the people, and that the whole nation not perish.’ Now he did not say this on his own initiative, but being high priest that year, he prophesied that Jesus was going to die for the nation, and not for the nation only, but in order that He might also gather together into one the children of God who are scattered abroad.” (Joh 11:49-52)

Without realizing what he was saying, Caiaphas was prophesying that Jesus would die for the nation of Israel, and also that He would die for all the children of God scattered abroad. This indicates that God does have children in other nations besides Israel. It also shows that Jesus needed to die so that God’s children would not perish. Without His death on the cross, there would be no salvation and all would perish.

In this sense, it is true that all human beings bear the image of the Divine Creator. As the apostle Paul said to the idol worshipers in Athens, "Being then the children of God, we ought not to think that the Divine Nature is like gold or silver or stone, an image formed by the art and thought of man.” (Act 17:29).

Why did Paul say, “Being then the children of God”? Did he really believe that all men were God’s children, including these idol worshipers? Certainly not!

If you read the entire passage, Paul was quoting one of their own poets. He said to them, “For in Him we live and move and exist, as even some of your own poets have said, 'For we also are His children.'”(Act 17:28). So he was trying to use their own language in order to reach them. We cannot use this passage to teach that we are all God’s children.

In this case, Paul was trying to reach them with the message of the gospel. If you read the entire passage, he told them that God is not like gold or silver or stone, an image formed by the art and thought of man. He went on to say, "Therefore having overlooked the times of ignorance, God is now declaring to men that all people everywhere should repent, because He has fixed a day in which He will judge the world in righteousness through a Man whom He has appointed, having furnished proof to all men by raising Him from the dead." (Act 17:30-31)

It’s very clear from the context that these people, who considered themselves God’s children, had need to repent of their sins. He told them that God would no longer overlook such ignorance and that He would soon judge the world in righteousness through His Son Jesus. If we understand this passage properly, we will see that Paul did not simply accept these people as children of God who would all go to heaven if they simply continue in their ignorance.

Prove yourselves to be children of God
So we know that we become a child of God through faith in Jesus Christ, and we know that the Spirit of God Himself testifies to our spirit that we are His children. So what’s left for us to do? Paul said you must “prove yourselves to be blameless and innocent, children of God above reproach in the midst of a crooked and perverse generation, among whom you appear as lights in the world.” (Phi 2:15). In other words, you have a part to play. If you are a true child of God as you say you are, then act like one! Your blameless and innocent conduct, living above reproach, will cause you to appear as lights in the world to this crooked and perverse generation.

John also taught here that since the world did not know Jesus, that is why they also do not know us, His children.

Beloved, now we are children of God, and it has not appeared as yet what we will be. We know that when He appears, we will be like Him, because we will see Him just as He is. (1Jo 3:2)

This is just as the apostle Paul taught how our actions should confirm that we are God’s children. If you love the children of God, you’ll love God and observe His commandments. This passage also teaches us that if you are not a child of God, then you are a child of the devil. The world is comprised of both types of people, so not all humans are children of God.

Consider another occasion where Jesus spoke about His mother. "While He was still speaking to the crowds, behold, His mother and brothers were standing outside, seeking to speak to Him. Someone said to Him, 'Behold, Your mother and Your brothers are standing outside seeking to speak to You.' But Jesus answered the one who was telling Him and said, 'Who is My mother and who are My brothers?' And stretching out His hand toward His disciples, He said, 'Behold My mother and My brothers! For whoever does the will of My Father who is in heaven, he is My brother and sister and mother.' " (Mat 12:46-50). So Jesus taught that those who are truly His brothers, and come from the same Heavenly Father, would do the will of the Heavenly Father.

In order to be a child of God, you must sincerely repent with a broken heart, and receive Jesus by putting all your faith in His Name. Then God in His love for you will give you the right to become His child. Then the Holy Spirit will testify to your spirit that you are a child of God.

And you will experience a glorious freedom when you become a child of God. You will know it has happened. You will no longer be a slave to sin, but will be free to love, free to live righteously. This is how you can recognize a child of God. He or she will love God and obey His commandments.

This is such good news to know that it is possible to be saved and become a child of God. I hope this encourages the children of God to go on and prove it by living blameless and innocent lives above reproach. Then we will appear as a light in the midst of a perverse generation. And let’s avoid falling into the common belief that all people are God’s children.

Attribution notice: Most Scripture quotations taken from the NASB.

Author's note: You may access more of my articles on the Main Directory of this blog, as well as my complete blog directory at "Writing for the Master.

Len Lacroix is the founder of Doulos Missions International.  He was based in Eastern Europe for four years, making disciples, as well as helping leaders to be more effective at making disciples who multiply, developing leaders who multiply, with the ultimate goal of planting churches that multiply. His ministry is now based in the United States with the same goal of helping fulfill the Great Commission. www.dmiworld.org.
Posted by Len at 6:44 AM