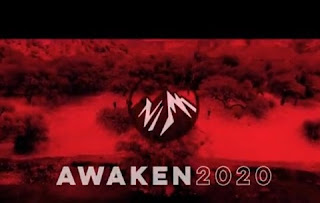 Let's take a close up look at the Awaken 2020 event held today January 18, 2020 at Sun Devil Stadium in Phoenix, Arizona. Of all the places in America that they could have chose for the event, they chose Sun Devil Stadium. They also chose red as their predominant theme color on their website, logo, and promotional videos.

The self -proclaimed purpose of the event was "open the womb for the third Great Awakening in America." Yet the two different promotional videos on the event's site (see here) and on Facebook (see here) had many antichrist, immodest, impure, and seductive images that have no place among God's holy people. The apostle Paul wrote:

"But among you there must not be even a hint of sexual immorality, or of any kind of impurity, or of greed, because these are improper for God's holy people." (Eph 5:3)

In case you are wondering what I mean by antichrist, it is that which is in place of Christ or against Christ. It can even include things that are taught in churches that are contrary to the teachings of Christ. For more on that please see my article called The Rise of Antichrists.

One thing about the event that was very strange was that Lou Engle was originally listed as one of the speakers for the event, and he is prominently featured in both of their promotional videos linked above. Lou Engle is connected with the New Apostolic Reformation (NAR), and while he loves homosexuals, he has spoken out against homosexuality as a sin. The event organizer, David Herzog, issued a press statement prior to the event, stating that Engle would not be an event speaker, nor was he affiliated with the event in any way. And in fact, Lou Engle ended up being a "no show" at the event. Herzog stated:

"...we want to make it specifically clear that: Lou Engle is not affiliated with, nor is he an organizer or partner of or a speaker at Awaken 2020...If any of our past potential or current event participants, speakers, and collaborators were affiliated with any such harmful platforms in any way or at any time, we do not support any view points as such. Awaken 2020 is a new opportunity for the Christian community to reset and align its message with respect for the people, especially the youth who are experiencing a time of revival and renewal in the wake of the new works of Kanye West and The Sunday Service Collective." (emphasis added). The focus on Kanye as opposed to Lou Engle is glaringly obvious. For those who have not yet noticed the red flags about Kanye, please read my article called Kanye West Issues and Concerns.

One of the speakers at the event named Kerwin Lee, who is a pastor from Atlanta, Georgia, got up to speak after Kanye's performance, and said, "How 'bout it for our leader, the one and only Kanye West!" Of course, that was followed by loud cheers from the audience. Yet Jesus said, "Do not be called leaders" (Mt 23:10). During Kanye's performance, the people in the audience had their cell phones lifted up high as they recorded him on video. After the event, when a local 12 News reporter interviewed people as they exited the event, one man said this: "When Kanye came on...all of a sudden a lot of people started piling in, and they were shouting 'Kanye,' but everybody was here really to come together and shout 'Jesus.'" The ABC15 Arizona news anchor woman Danielle Lerner commented, "Clearly they were there to see Kanye."

Herzog further stated in his press release that he "would like to emphasize that our message is of Love and Unity." Although this event was being billed as a revival and a spiritual awakening, he didn't say anything about repentance, which is essential to any revival. Instead he emphasized Love and Unity. We know that it is satan who seeks to bring about ecumenical unity for a one-world New Age religion, and the unity of all nations under a one-world government. It's no wonder that David Herzog's Ministry is located in Sedona, Arizona, which is the New Age capitol of the United States, and perhaps the New Age capitol of the world.

Scriptures
Scriptures warn us that events like this would happen in the last days. Here are just a few:

"At that time many will turn away from the faith and will betray and hate each other, and many false prophets will appear and deceive many people." (Mat 24:10-11)

"So if anyone tells you, 'There he is, out in the wilderness,' do not go out; or, 'Here he is, in the inner rooms,' do not believe it. For as lightning that comes from the east is visible even in the west, so will be the coming of the Son of Man. Wherever there is a carcass, there the vultures will gather." (Mat 24:26-28)


"But mark this: There will be terrible times in the last days. People will be lovers of themselves, lovers of money, boastful, proud, abusive, disobedient to their parents, ungrateful, unholy, without love, unforgiving, slanderous, without self-control, brutal, not lovers of the good, treacherous, rash, conceited, lovers of pleasure rather than lovers of God— having a form of godliness but denying its power. Have nothing to do with such people." (2Ti 3:1-5)

"For the time will come when people will not put up with sound doctrine. Instead, to suit their own desires, they will gather around them a great number of teachers to say what their itching ears want to hear." (2Ti 4:3)

Closing Words
Suffice it to say that the Awaken 2020 event had many New Age and antichrist images and words associated with it, which is yet another sign of the times. There was even a seductive spirit about their promo video. The event was also idolatrous, in that man was exalted and worshiped, but nobody said anything to stop it. Based on the litmus test of God's Word, it seemed more like a New Age, antichrist event than a true, biblical revival meeting. It is also very peculiar that the event organizer David Herzog disowned Lou Engle for his view on homosexuality, emphasizing that the focus was on Kanye West as the featured performer at this event. Didn't Jesus predict that in these last days many like Herzog would fall away, betray one another, and hate one another?

I personally would not have sent anyone that I love or care about to that event, because the Bible teaches us to have nothing to do with such people, and to avoid worldliness and compromise. Those who don't see a problem with any of the red flags I have presented here lack spiritual discernment and may even be caught up in the very same things themselves. They truly need a spiritual awakening.

Author's note:  You must take responsibility for your own actions. This is only to provide you with information, so that you can make your own decisions, for which you will be accountable to God.

I also recommend reading Kanye West Issues and Concerns, The Rise of Antichrists, Pope Frances Supports Homosexuality, Pope Establishes One World Religion, New Age New World Order, Rock, Rap, and Reggae Music -- Five Divine Revelations, The Forgotten Sin of Worldliness, Separation from the World, Godly Attire and Adornment -- Seven Divine Revelations, and The Top Ten Things Jesus Taught. You may also visit our Signs of the Times Directory. You may access my complete blog directory at Writing for the Master.

Len Lacroix is the founder of Doulos Missions International.  He was based in Eastern Europe for four years, making disciples, as well as helping leaders to be more effective at making disciples who multiply, developing leaders who multiply, with the ultimate goal of planting churches that multiply. His ministry is now based in the United States with the same goal of helping fulfill the Great Commission. www.dmiworld.org.
Posted by Len at 12:30 AM