The Message Bible or "The Mess" 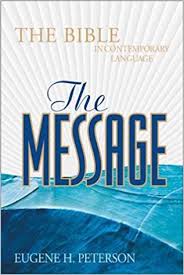 Please beware, people, that the Bible version known as The Message is not a translation but a paraphrase. It is a mess written by Eugene Peterson, which has many words added that are not in the original text of Scripture.

New Age Connections of Author
Consider the fact that the author of the Mess (Eugene Peterson) says that the New-Age-religion novel called The Shack may be the Pilgrim’s Progress of our generation. In his endorsement on the front cover of this heretical book he states: “This book has the potential to do for our generation what John Bunyan’s ‘Pilgrim’s Progress’ did for his. It’s that good!” That is complete rubbish. Please read my article on The Shack here:

The Shack is an Attack

New Age Expressions in the Message Bible
The Mess has numerous New Age expressions, including a heretical version of the Lord's prayer, which states "as above, so below," which is a pagan concept. Here is the whole prayer in The Mess:

"Our Father in heaven,
Reveal who you are.
Set the world right;
Do what’s best—
as above, so below.
Keep us alive with three square meals.
Keep us forgiven with you and forgiving others.
Keep us safe from ourselves and the Devil.
You’re in charge!
You can do anything you want!
You’re ablaze in beauty!
Yes. Yes. Yes."
(Matt 6:7-13, MSG).

The pagan and metaphysical communities use the expression "as above, so below" to refer to the relationship between the spiritual and physical realms. It is also used by those in the occult world, and has been accepted by every known religion. However, since the original text of the Bible states, "Your Kingdom come," there is no basis for inserting this pagan, occult expression into Scripture. It is nothing less than a New Age perversion of God's Word.

The God of Green Hope
Another example of adding to Scripture to create a New Age twist is in Romans 15:13 of the Message Bible, where it states:

The word "green" is not in the original text, and it should not be inserted here, unless the author is once again intentionally using an expression that appeals to the New Age community. The term has its origin with the Druids, who offered human sacrifices. But "green" is a term often heard among those who worship "mother earth" and seek to be one with nature. For example, they have terms like "going green," referring to being more eco-friendly, and "green energy", which refers to forms of energy that are less harmful to the environment. One of the most extreme and controversial environmental organizations in the world is called "Greenpeace," which claims to be fighting to save the planet. That being said, it's also worth noting that according to Hans Biedermann's Dictionary of Symbolism, "...the devil appears as 'the green one'..." (p. 159).

Changes to Injunctions to Avoid Sexual Immorality
Another change that Peterson made is to the clear injunction to "flee fornication" or "avoid sexual immorality" found in 1 Corinthians 6:18. The Mess says, "There’s more to sex than mere skin on skin."

Again in Acts 15, instead of recording the decree of the elders and apostles at the First Jerusalem Council to "avoid fornication" or "avoid sexual immorality", Peterson simply states, "guard the morality of sex and marriage." (Ac 15:20,29, MSG).

These few examples will suffice to show that the text has been altered considerably. 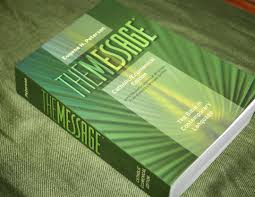 One more thing I'd like to mention is that Peterson also has a Catholic-Ecumenical version of the Message Bible. In case you are not aware of the Unbiblical Practices of the Catholic Church, I strongly recommend reading my article on that topic at the link I just provided. The ecumenical movement is just a part of the New Age New World Order that will take you down to hell.

What Are People Saying About The Mess
Here is what Don Koenig of The Prophetic Years website says about the Mess:

"I for one am fed up with those who quote 'The Message' as if it were the Bible. It is not. It is nothing but a very bad paraphrase. Stop quoting 'The Message' on your media programs or I will turn you off for good. Stop quoting 'The Message' from your pulpits or I will walk out of your church. Stop reading from 'The Message' in your Bible studies or I will not attend. Why? Because Eugene Peterson's popular paraphrase of the Bible is twisted. He has no biblical discernment, his bad paraphrase of the word of God is not the word of God no matter how popular it has become. If you cannot use a literal version of the Bible to get across your teachings perhaps you should not be teaching at all. Now Eugene Peterson is endorsing even more twisted writings for your deception."

Others have made the following comments:

"In a nutshell, the MSG 'translation' is just Eugene Peterson's heretical commentary on Scripture.﻿"

"It's new age garbage and many will be fooled by it.﻿"

"The message is a new age bible﻿"

"Message bible is of the devil."

"It [shouldn't] just be thrown out but burned so no one else can get that copy﻿."

"A number who had practiced sorcery brought their scrolls together and burned them publicly. When they calculated the value of the scrolls, the total came to fifty thousand drachmas." (Ac 19:19, NIV)

"The author even says its not the Word of God and doesn't suggest it to be preached."

"It's not faithful at all to the biblical text."

Putting it All Together
I hope this expose' has helped to open your eyes to the dangers of this heretical, mystic paraphrase by Eugene Petersen, as well as to his personal New Age leanings. Don't be deceived! I advise you to avoid using this version, and if you own a copy of it, I would suggest you burn it so nobody else can read it.

Author's note:  I also recommend reading The Shack is an Attack, Deleted Scriptures in the Bible?, Scripture Alone, Accurately Handling the Word of Truth, Exposing Heresy, The Rise of Antichrists,  Not Enduring Sound Doctrine, Sins That Will Keep You From Heaven, The Top Ten Things Jesus Taught, Avoid Becoming a Corrupted Christian, Michael Thomas Sambo's Revelation of Heaven and Hell, Angelica Zambrabo Hell and Heaven, Unbiblical Practices of the Catholic Church, and New Age New World Order. You can access the Home page of this blog for more articles on Truth and heresy, as well as my complete blog directory at "Writing for the Master."

Len Lacroix is the founder of Doulos Missions International.  He was based in Eastern Europe for four years, making disciples, as well as helping leaders to be more effective at making disciples who multiply, developing leaders who multiply, with the ultimate goal of planting churches that multiply. His ministry is now based in the United States with the same goal of helping fulfill the Great Commission. www.dmiworld.org
Posted by Len at 9:52 AM