The Shack is an Attack 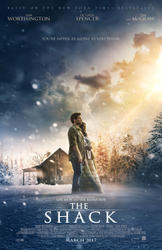 I have never read the book called The Shack, but what little I have read about it from some of the reviews shows me it has serious theological problems known as heresies (falsehoods). Rather than try and reproduce another review of my own, I will instead link to some of the reviews that already exist. I recommend the following:

Thirteen Heresies in the Shack

CARM's Take on the Shack

The Shack -- The Missing Art of Evangelical Discernment

I hope you will take a moment to read these articles and consider what they are communicating from the Word of God about that book, which The Shack movie is also based on. Based on what has been presented in these articles, the book is a myth that tickles people's ears. "They will turn their ears away from the truth and turn aside to myths." (2 Tim 4:4). Let me encourage you to read my article, Not Enduring Sound Doctrine.

This is not just a book, it is an assault on sound doctrine. Now they have come out with The Shack movie based on the book, which is endorsed by many pastors and ministry leaders. In fact, they even have The Shack Outreach Campaign for churches, so they can buy an official copy of The Shack Movie Church Kit and a license to show the movie in church. The Shack Campaign Kit is a 5-Week kit that comes with five sermons, film clips, a planning guide, digital resources like web and social media graphics, PowerPoint templates, bulletin insert templates, and sample invitation tools to invite people to come and see the series at church. Moreover, they even sell a separate study guide for The Shack Campaign, which contains discussion questions and personal applications, so that small groups, families, and individuals can study the things presented in the book and movie. Obviously this goes beyond mere entertainment into the realm of preaching and teaching the concepts of this movie and book in the Church, as if they were biblical truths.

Although these slick marketing resources are presented as an invitation to experience the ultimate truth about love, loss, and forgiveness, that is simply a facade. In reality, this is an attempt to make a deeper penetration into the Body of Christ with this heresy. This is brainwashing propaganda for the masses. The Shack is not based on fact, but rather is an evil attack from the enemy to bring mass deception. Beware! Don't be one of the millions who are being deceived by it. And don't let those you love be deceived by it either. If God has used this this article to open your eyes, then share this article with them, too.

Attribution notice: Most Scripture quotations taken from the NASB. The Shack image used according to Fair Use laws for commentary and educational purposes only.

Author's note:  I also recommend reading The Message Bible or "The Mess", Not Enduring Sound Doctrine, Sins That Will Keep You From Heaven, The Top Ten Things Jesus Taught, Only the Holy -- Three Shocking Testimonies, Ask for the Ancient Paths, Holding Fast the Faithful Word, Avoid Becoming a Corrupted Christian, God Forgives and Forgets, The Law of Christ, Deleted Scriptures in the Bible?, Costly Grace, Is Obedience Optional?, Is Practical Righteousness a Lost Truth?, Practicing Your Righteousness, Faith Works!, The Ways of Life, Scripture Alone, Accurately Handling the Word of Truth, Exposing Heresy, The Rise of Antichrists, Michael Thomas Sambo's Revelation of Heaven and Hell, Angelica Zambrabo Hell and Heaven, The Cost of Discipleship, and Striving to Enter the Kingdom of God. You can access the Home page of this blog for more articles on Truth and heresy, as well as my complete blog directory at "Writing for the Master."

Len Lacroix is the founder of Doulos Missions International.  He was based in Eastern Europe for four years, making disciples, as well as helping leaders to be more effective at making disciples who multiply, developing leaders who multiply, with the ultimate goal of planting churches that multiply. His ministry is now based in the United States with the same goal of helping fulfill the Great Commission. www.dmiworld.org
Posted by Len at 8:33 AM